Visitors to South Luangwa at this time of year are treated to one of Africa’s most spectacular and colourful sights. In early September, new notes are added to the music of the bush orchestra a distinctive “rik-rik-rik- rak” fills the air…signalling the annual arrival in Zambia of Merops nubicoides, or the “Southern Carmine Bee-eater” to the non-scientists, truly one of Africa’s most beautiful birds!

These highly gregarious and vocal birds favour the steep, sandy banks of the Luangwa River as nesting sights. Having migrated from the coastal areas of Tanzania and Mozambique both male and female birds soon start to excavate holes into the river bank. Using their bills and later their feet, they create a horizontal tunnels roughly two metres deep, terminating in oval, unlined nest chambers. These dense breeding colonies may contain over one thousand nests and sites are often constructed along the same stretch of river year after year. Such massive excavation can result in considerable weakening of the shore line and cave-ins are not uncommon, especially when elephant or buffalo herds are passing overhead!

Living in such crowded communities, disputes between neighbours often break out and aerial pursuits are common. Though bee-eaters do eat bees, their diet consists of a variety of flying insects; termite alates, cicadas, dragonflies, butterflies, locusts. The stings and venom of bees and wasps are usually removed by rubbing against a convenient perch. After hatching the chicks are fed on insects by both parents. At this time of year, there is a more than abundant food supply thanks to the arrival of the early rains which is the signal for the “bug world” to wake up.

By December, when the heaviest rains arrive, the young birds are fully fledged and the colonies are abandoned to floods and erosion until next year, when the cycle begins again, and the natural world amazes once more…. 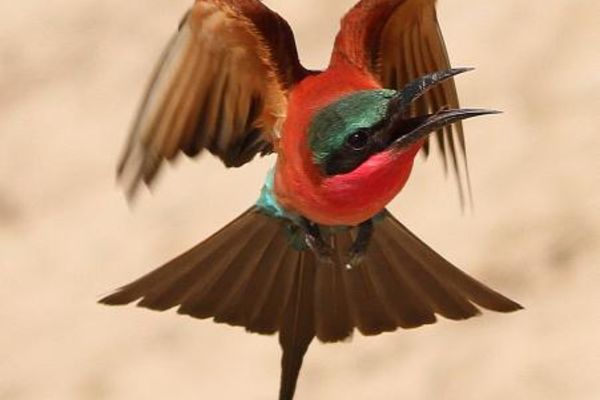 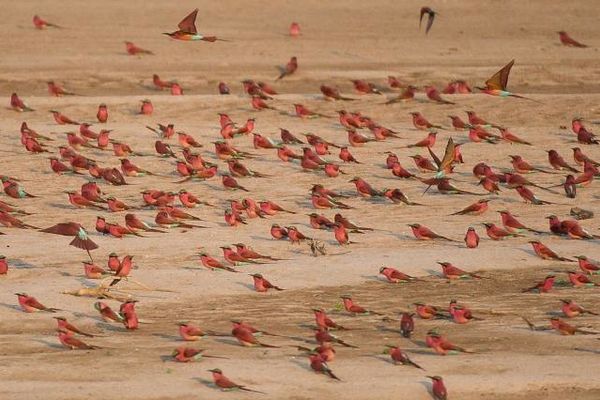 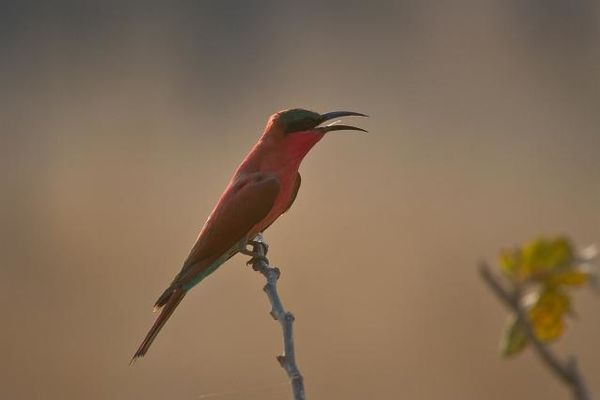 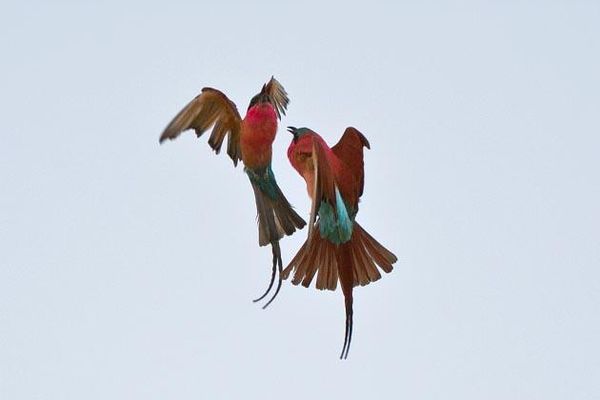 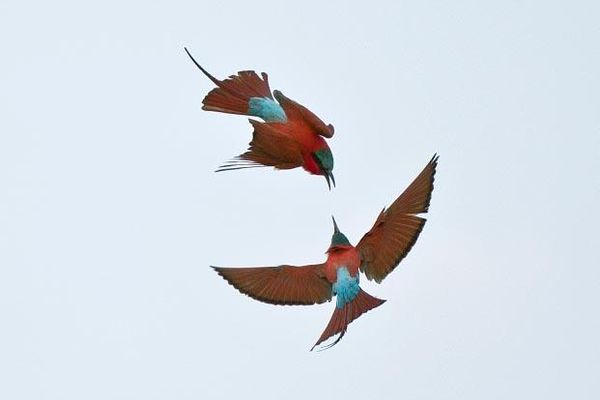 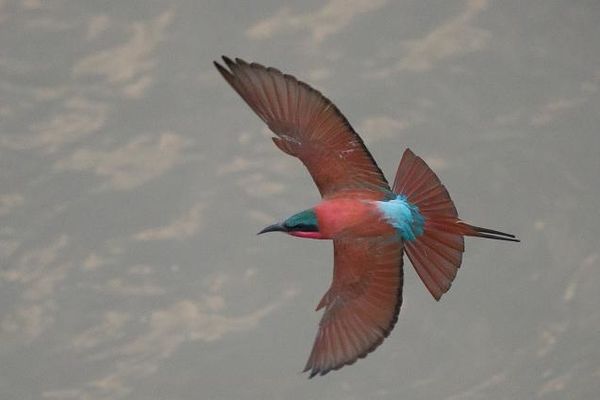 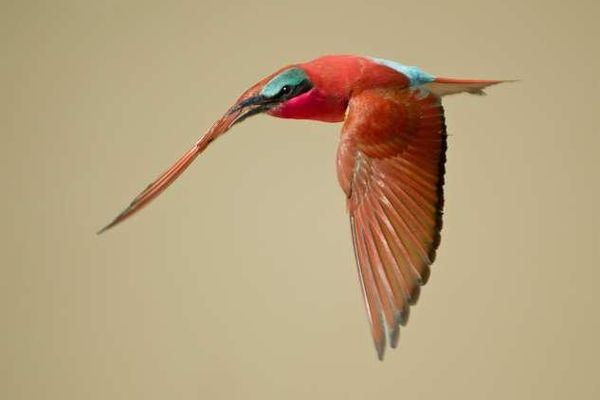 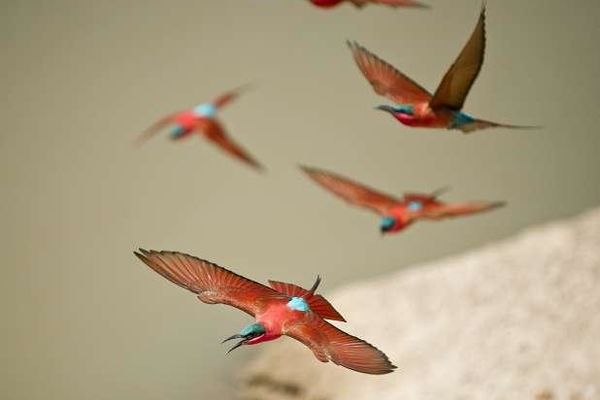 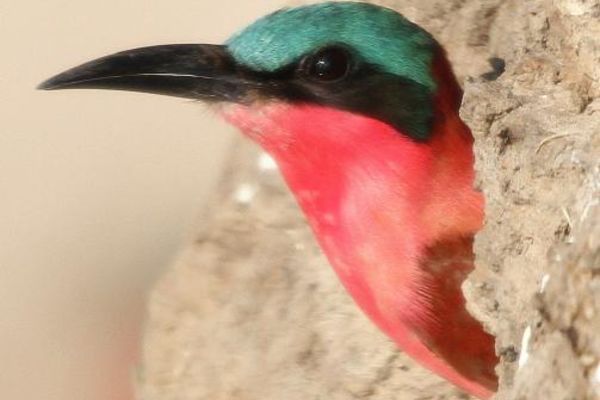 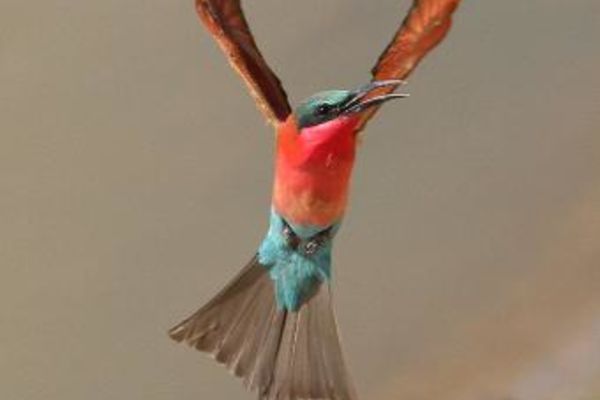 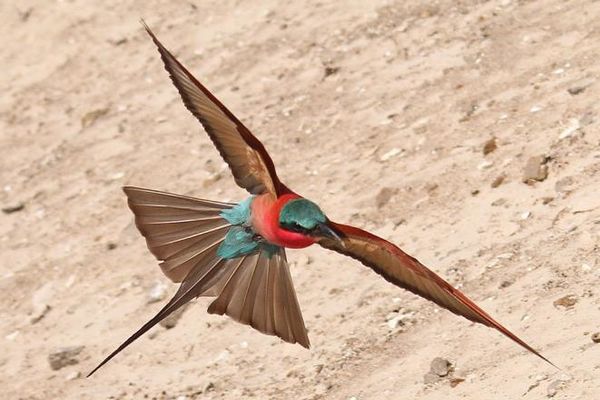 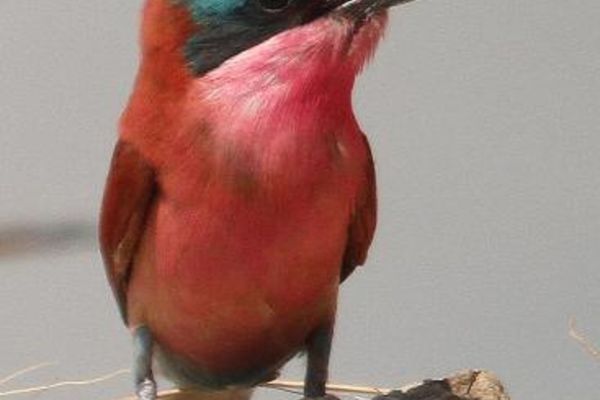 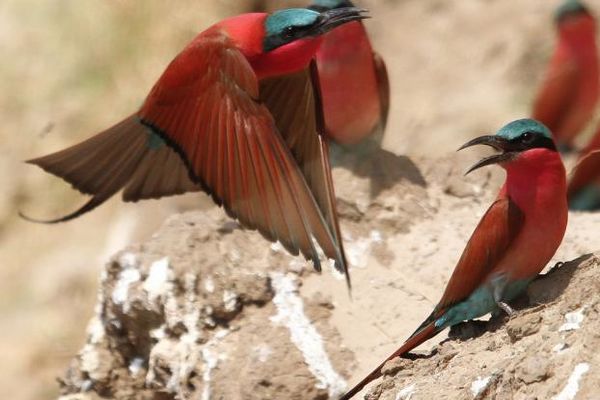 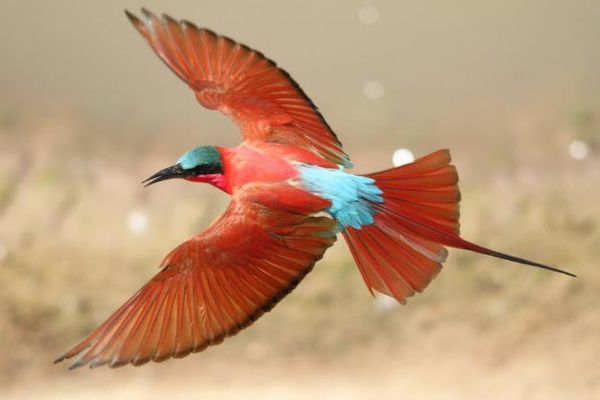 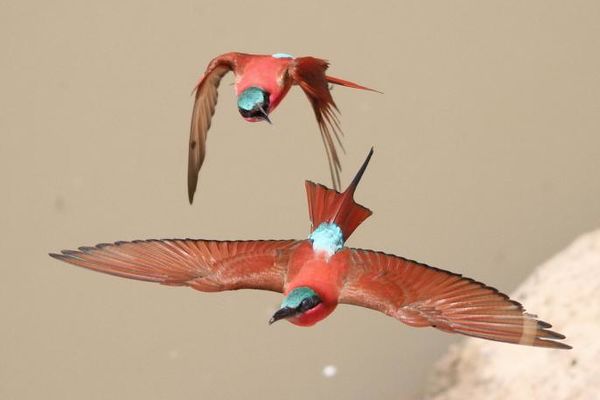 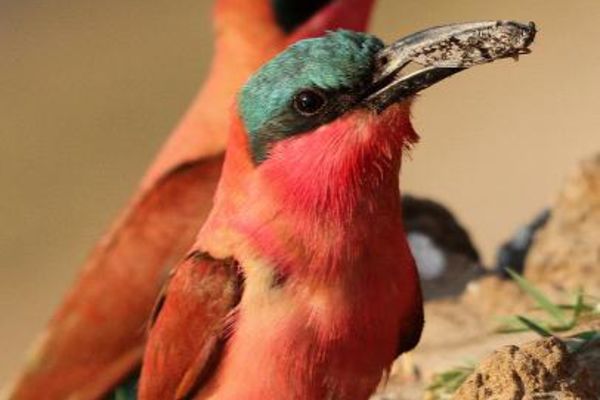 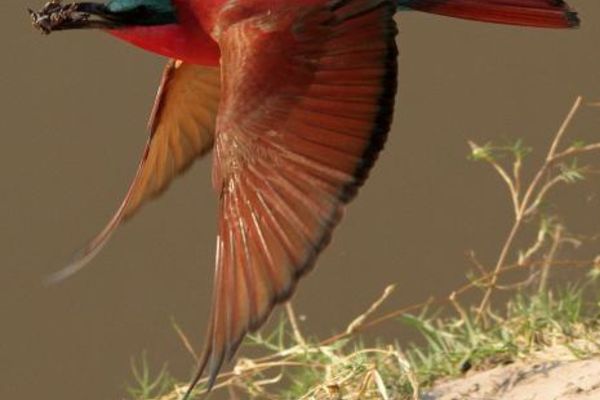 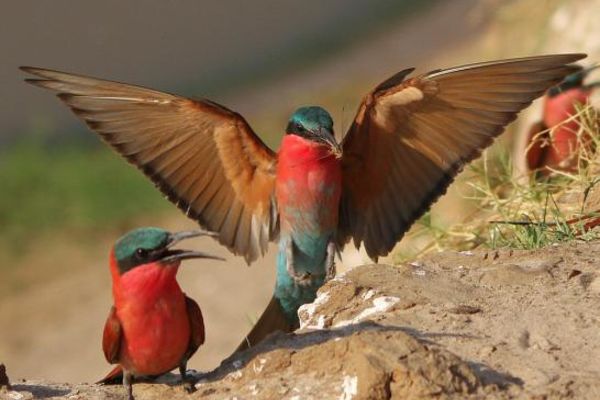 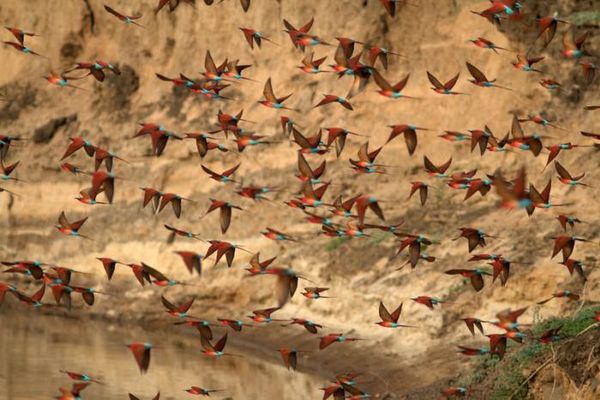 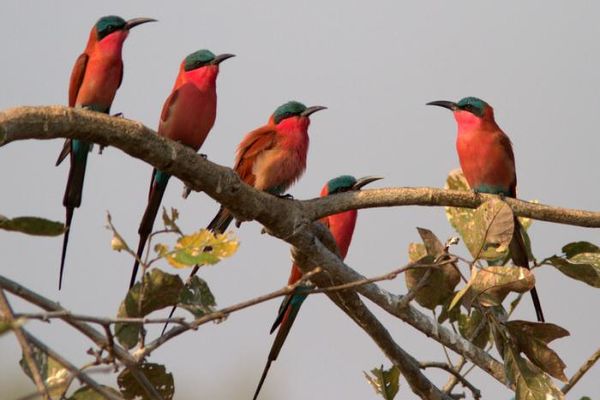 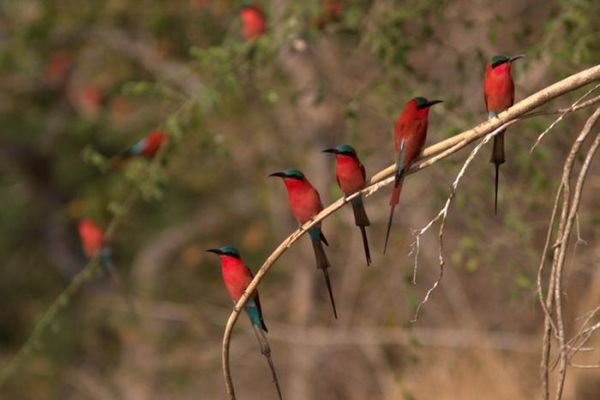 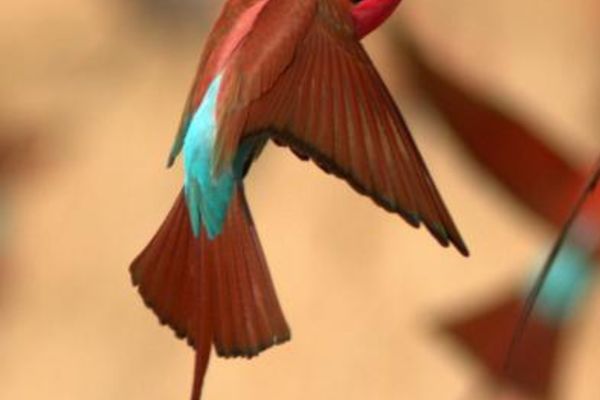 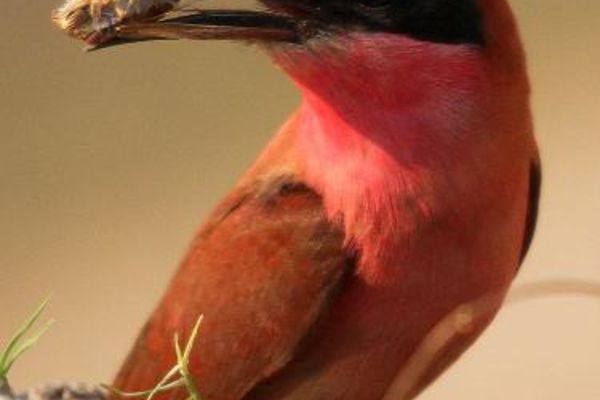