In 2008 a baby elephant that was orphaned near Chamilandu bushcamp, and named after it, was taken to the Kafue’s Elephant Orphange Project (EOP). We were excited to hear that just the other day the EOP four orphans made their first fully interactive encounter with two wild Kafue bull elephants. During an afternoon walk the elephants were grazing in an open plain, 2km from the elephant boma. Their Keepers, who sat watching them 150m away, noticed two big bulls (approx 20-25 years old) heading towards the little orphans from a nearby thicket. On seeing the bulls Chodoba lifted his trunk and approached one of them, and as it came up to him he began touching the bull with the tip of his trunk! The bull was content to let Chodoba study him while he himself started to graze, Chodoba by his side. The other bull continued forward to where Chamilandu was grazing with the younger ele’s.

To the amazement of the keepers this bull started touching the babies (Tafika and Batoka) with his trunk and they reciprocated, showing no fear as the bull towered over them! For nearly 1 hour the little ele’s played and grazed contently in the company of these local giants, as if this meeting happened every day. The ele’s it seems are still controlled by their bellies and routine, and as the time came for them to return to the boma (just before dark) Chodoba knew to take the lead. With a few calls of encouragement all the ele’s happily followed their Keepers back for milk and pellets, leaving the wild bulls heading off into the Ngoma Forest as the sun began to set. This incredible encounter demonstrates the caring and affectionate nature of these gentle giants and reinforces our beliefs that the little orphans will one day be accepted by the local Kafue elephants, to give them a second chance for a life back in the wild. 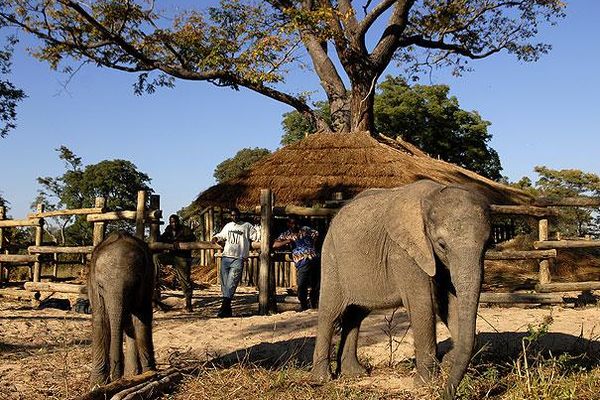