Over a long period of time every safari guide who takes visitors amongst the wildlife of Africa will have witnessed amazing animal incidents. The most extraordinary sequence of events that I have ever seen in the wild happened in September 2009. The setting was the South Luangwa National Park in Zambia’s Luangwa Valley where I work as a safari guide for the Bushcamps Company. I am based at Kuyenda Camp which is managed by my partner Babette Alfieri.

On 8th September we had four guests in camp, husband and wife Jim Orr and Cynthia Tuthill and husband and wife Ron Leavitt and Elaine Kane, all from California. They were all repeat clients having been at Kuyenda with us as a group two years previously. On the day that proved to be so incredible the four friends opted to take an extended afternoon/night drive returning to camp after nightfall. In the afternoon we drove along the track upstream along the Nkhulyata channel which is actually an old stretch of the Luangwa River which shifted a long time ago to its present course.

We were watching a beautiful pair of kudu, a superb bull and a big female, when about thirty puku came running towards and past us on the short-grazed open grass lawns on the opposite side of the channel. Clearly they had been alarmed by a predator so we quickly drove up along the loop road where we found a big lioness lying on the short grass lawns on our side of the channel. Before driving closer, though, I stopped the Land Rover to look and listen because Isiaih Nyirenda our wildlife scout and I had heard baboons alarm barking to our left where there was a wide expanse of open rough dry clays. While our guests watched the lioness on our right I scanned the clays with my binoculars and soon observed a tiny infant puku racing in our direction over the rough ground. I was focused on the puku when to my astonishment a leopard launched itself up out of a gulley in the clays and seized the puku in midair. Leopard and puku then tumbled back out of view into the gulley. As I shouted to the guests about what had happened I saw a number of big baboons rushing onto the clays loudly barking and screaming as they ran. Pandemonium now ensued. The leopard emerged minus its prey running from the gulley closely followed by about ten baboons that were relentlessly trying to bite the big cat. They all ran across the rough clays with the leopard stopping a couple of times to turn and lash out at the baboons, then running on to finally take refuge in a thicket beyond the clays. The baboons lost interest at this stage and eventually wandered away whereupon I drove the Land Rover to check the leopard’s kill. The carcass was in the bottom of the shallow gulley and it proved to be a very small infant puku that had been killed by a bite across the back of the neck immediately behind the ears.

We now turned back to have a closer look at the lioness and were watching her when Isiaih, our scout spotted a big-maned male lion lying on the channel about 150 metres upstream from the lioness. Driving to opposite the lion which was on the other side of the channel, we watched the big cat walk down into the channel bed to drink from a large pool of water. Next, either Jim or Ron noticed the lioness behind us climbing a large mchenja (African ebony) tree so back we went to see this infrequent behaviour. Initially the lioness was standing on a large bough about four or five metres above the ground but she next moved to a smaller branch on which she lay with her legs straddling it like a leopard. Soon though, she stood up and stared fixedly at a point beyond the rough clays but closer than where the leopard had hidden in the thicket. The lioness scrambled down the sloping bole of the mchenja tree and trotted quickly in the direction in which she had been staring. Following in the Land Rover we saw the lioness enter a sparse clump of bushes from which in the next few moments emanated a tremendous cacophony of explosive roars and snarls. Ultimately, we had clear views of two lionesses tumbling about in ferocious combat. The reason for the dispute was the partly-eaten carcass of an adult female puku, presumably the mother of the infant puku that had been killed by the leopard nearby. Whilst this fracas was going on, each lioness trying to dominate possession of the carcass, we heard a couple of very loud roars from the direction of where the male lion had been. Meanwhile, the lionesses reached a truce and settled down to eating the puku. Moments later though, pandemonium broke out again when the male lion rushed past the left side of the Land Rover and launched himself at the lionesses. A ferocious melee ensued with the male grappling with them and attacking with bared fangs and lashing forepaws while he lay on the puku carcass, denying the females any access to the meat. The resultant noise of horrendous roars and snarls was almost deafening. It seemed that the lions must surely inflict serious wounds upon each other with their slashing fangs and claws though surprisingly this did not seem to happen.

While this was going on the next participants in the drama appeared on the scene! These were two big bull elephants that initially were heading for an ivory palm tree nearby on our right. However, the fuss being made by the lions piqued the elephants’ interest and with ears outspread, the bulls moved towards the big cats and us. Discretion was necessary and I reversed the Land Rover away from the lions before we became sandwiched between them and the bulls. The sound of the vehicle engine, however, caused the elephants to change direction and they walked away past the lions much to my relief.

Dusk was now falling and as it was past sundowner time I suggested to my party that we leave the lions and go to have our drinks at the tree line beyond but near where the leopard’s kill still lay in the gulley. While having our drinks we could watch for the leopard that was certain to return for its victim. Sure enough, the leopard eventually appeared walking across the rough open clays. It was very wary and stopped a couple of times to look around but finally it picked up the puku infant and retraced its route across the clays. The leopard was heading for the thicket in which it had taken refuge from the baboons and was almost there when the male lion abandoned its possession of the big puku carcass and rushed in pursuit. The most likely reason why the lion should act in this manner is that it could not tolerate competition from another predator in its territory especially as lion and leopard are implacable enemies. The leopard dropped its kill and sped away into the thicket leaving the lion to seize the carcass and carry it back to place it by the body of the mother puku. Subsequently the male lion closely guarded both kills keeping the two lionesses at bay with frequent growls. At one stage he even stood by the kills and produced a series of loud and very impressive full-bodied roars. As we watched these events with the aid of a spotlight, Isiaih noticed that the leopard had reappeared and was standing near us obviously hoping that she (for we could now see that it was a leopardess) might perhaps recover her meal. Finally, however, she conceded defeat and walked away.

All these interactions occurred over a period of a little more than two hours and in an expanse of ground about 250 by 150 metres. To have seen any one of these incidents separately would have been sufficiently unique and rewarding in itself but to see several interactions between so many different animals in such a limited an area was quite astounding. Once again the Luangwa Valley had lived up to its phenomenal reputation for exceptional game-viewing! 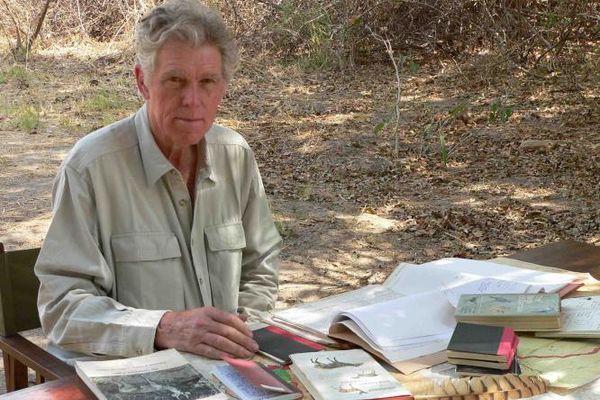 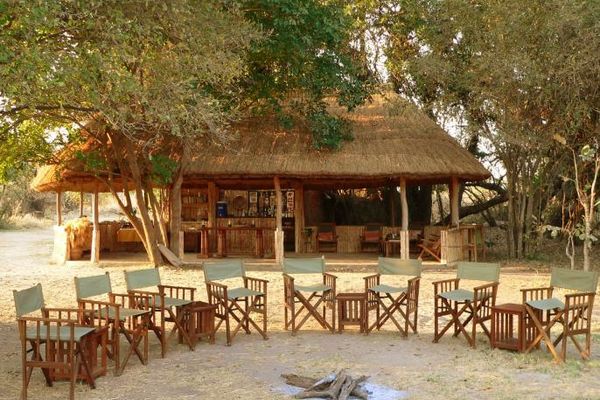 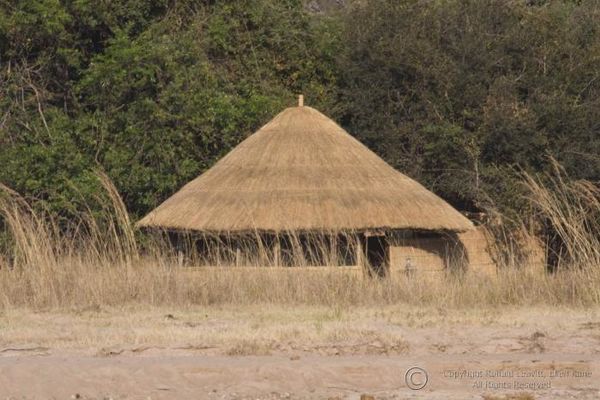 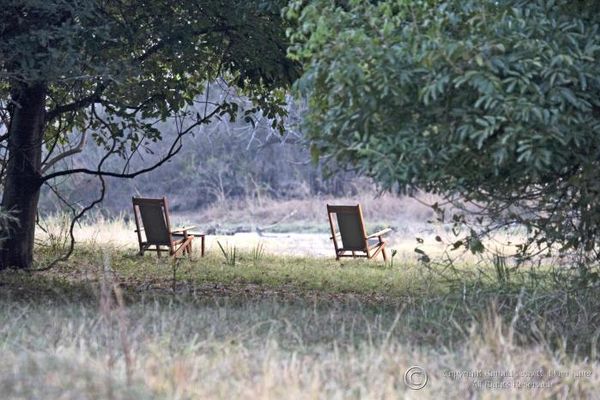 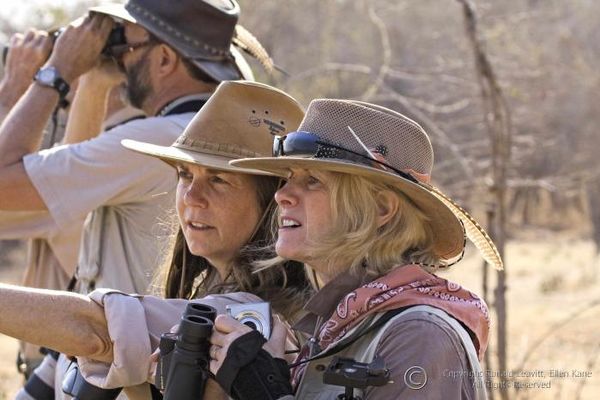 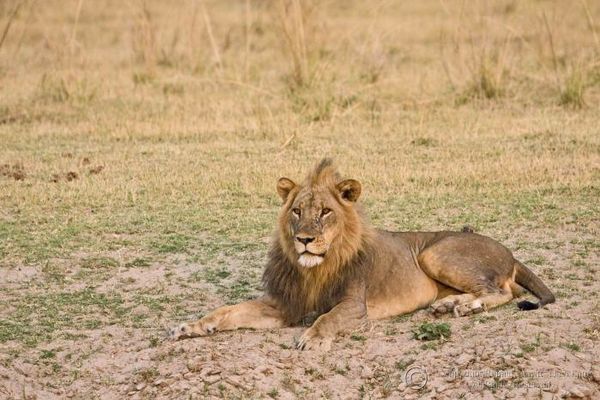 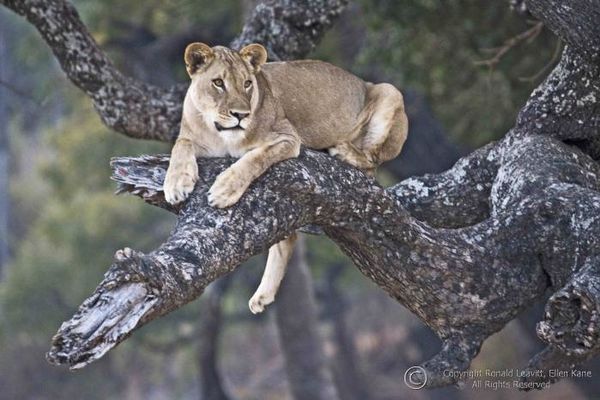 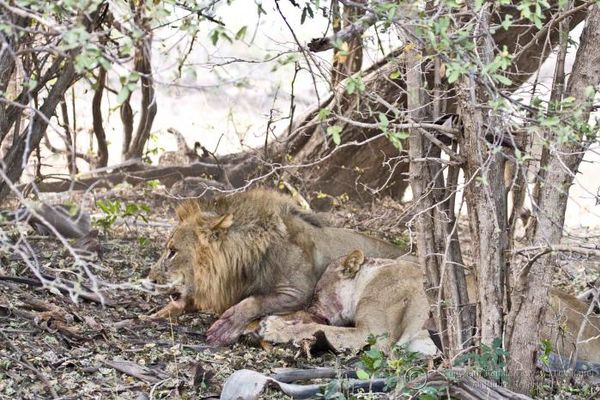